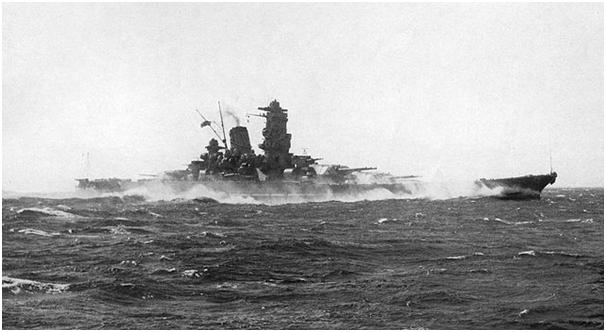 In this post, we will be revisiting the most famous ships in history series with the Japanese battleship Yamato. Previous parts of this interesting series are the H.L. Hunley and the Santa Maria.

During the Second World War, a major part of Japan’s fights were in the Pacific Ocean, in which their biggest rivals were the United States. The U.S. Navy greatly outnumbered Japan’s fleet, and the Yamato and one other battleship were designed to swing things in Japan’s favour. At a length of 263 m and a weight of 65,027 t, this battleship and her sister are the heaviest ever constructed? Yamato also holds another record, the most powerfully armed battleship ever constructed with nine 46 cm main guns.

Yamato was commissioned in late 1941 and spent 1942 serving as the flagship of the Japanese Combined Fleet. In June of 1942, she was used as the command ship for the famous Battle of Midway. Although Japan suffered a huge defeat, with over 3,000 deaths and the sinking of 4 carriers and a heavy cruiser, Yamato managed to escape. Despite her powerful arms, Yamato did not fire her main guns at enemy ships until October 1944 during the Battle of Leyte Gulf. However, the Japanese had mistaken a decoy group of small and cheap light ships and carriers to be U.S. battleships and the massive guns were wasted in a very one-sided battle. The Japanese navy suffered huge losses in this battle and was forced to turn back.

By 1945, Japan was severely losing their grasp on the pacific and was suffering from depleted fuel stocks. A decision was made for Yamato to make a one-way trip to the island of Okinawa where it was planned for the battleship to defend the island from attacking Allied forces and slowing their advances through the pacific until the ship was destroyed.

This destruction happened not long afterwards. In April 1942, Yamato was part of a mission codenamed Operation Ten-Go in which Japanese forces gathered around the island of Okinawa with the intention of engaging the Allied forces on and around the island. On the 7th April 1945, the battleship was spotted by U.S. forces and was quickly engaged by aircraft. As a result of eleven torpedoes and six bombs, the Yamato rapidly sank, with a huge estimated loss of 3,055 out of 3,332 crew.

Here at Offshore Supplies, we’re passionate about boats of any sizes so if you’re in need of any marine supplies, we can certainly help! For more information about what we can offer, feel free to contact us and a member of our friendly team will be happy to help you.