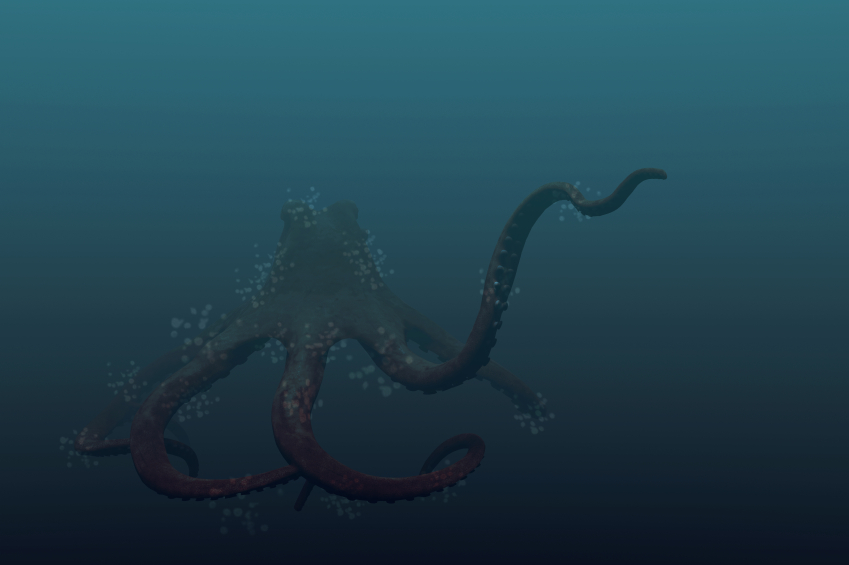 There have been numerous blogs about the strange and wonderful mythical creatures that are said to wander our oceans, but what should you actually do if you come across one? The obvious answer is sail very fast in the opposite direction, but the nature of the kraken makes it a very clingy creature that doesn’t want to let go. It acts almost as if it were a scorned lover and not a feared demon of the deep.

It’s a bizarre situation to find yourself in and highly unlikely to ever happen, but if it does we have compiled a few easy steps for dealing with this minor obstacle on your leisurely sea journey.

Step One: Pinch Yourself

The first step is to question reality. Literally, it can’t be real. That cannot actually be a real-life kraken snaking its long limbs around your boat in the least friendly hug to ever occur on the high seas. But if you’re still in this situation after a really hard pinch to the forearm? Brace yourself.

Seriously, with the sincerest of apologies, you are about to be eaten by a kraken. But, okay you don’t want to go down without a fight? That’s understandable. In which case…

Step Three: Get a Gameplan

First of all pray to every nautical god in existence, just in case. Then check the supplies that you have on hand. Krakens are massive beasts and if they follow the logic of real life they should be pretty slow moving; if they have taken on the speedy motions of a movie monster however, you are out of luck, all in the name of added drama.

Disclaimer: saving your life will likely be a two-man job at least, fair warning, so if you’re alone in this situation then your best bet is to cut your losses and jump overboard at once.

If you have a mate or two you can find that a ship is chock full of handy bits and bobs for everyday sea life, and surprisingly a lot of these everyday sea items can be used to fight the threat of a massive mythical monster. If you are wearing a good water proof jacket, for example, you are not likely to get bone chillingly wet until your ship is destroyed and you are floating in the water wondering what on earth your life has come to. A safety helmet is also the perfect accessory for avoiding head injuries whilst you wage your strange battle.

Also, this is a great point to think about the kraken’s weaknesses. It’s huge, that’s a given, but it’s also a very fleshy and unprotected beast. Plenty of things can pierce its skin and give you a fighting chance to stop those massive limbs from dragging your boat to the bottom of the sea. They also have a massive vulnerability in their huge gaping mouth that is likely looming above you right about now. That’s a great place to stuff something that will make your new friend think twice before taking a bite out of you.

After that, the only thing left to do is fight the thing…

So, after searching the immediate area you have acquired a wrecking bar and a hacksaw, each quite formidable when facing a creature of the deep depths. Share these items between you and your fellow crew members; the saw is great for getting those pesky tentacles off your ship and stopping the damage that would inevitably lead to your doom.

The wrecking bar isn’t going to hack straight through any limbs, but it can cause a lot of damage and make the slimy monster think twice before grappling with you. Or it can just annoy it further, here’s hoping for the former!

Okay, so hacking away at its tentacles has stopped the inevitable descent into the watery depths for now, but it has also served to make the kraken angry as well as hungry. Hangry isn’t a good look on anyone, but instead of a Snickers you better feed this unruly beast something a little bit more explosive.

Your real and only weapon that may stand a chance against this unruly fellow is a jerry can. Yes, you read right, and not only that but a tea towel too. Hopefully you’ve managed to preserve a full can, you’re going to need all the fuel you can get for this one to work. Fashion yourself a rudimentary bomb by stuffing the can’s funnel with the towel, make sure it starts to soak through and then light it up.

For maximum damage the best place to aim has to be the krakens mouth. Let out one last plea to who knows what and throw as if your life depended upon it, because it kind of does.

No one will ever believe you.

Are you ready and equipped to fight your high sea monster battles? From safety goggles to wrecking bars, you can rely on our team of expert boat chandlers for all of your boating needs, call us on 01524 862010 and we will be happy to answer any enquiries you may have!