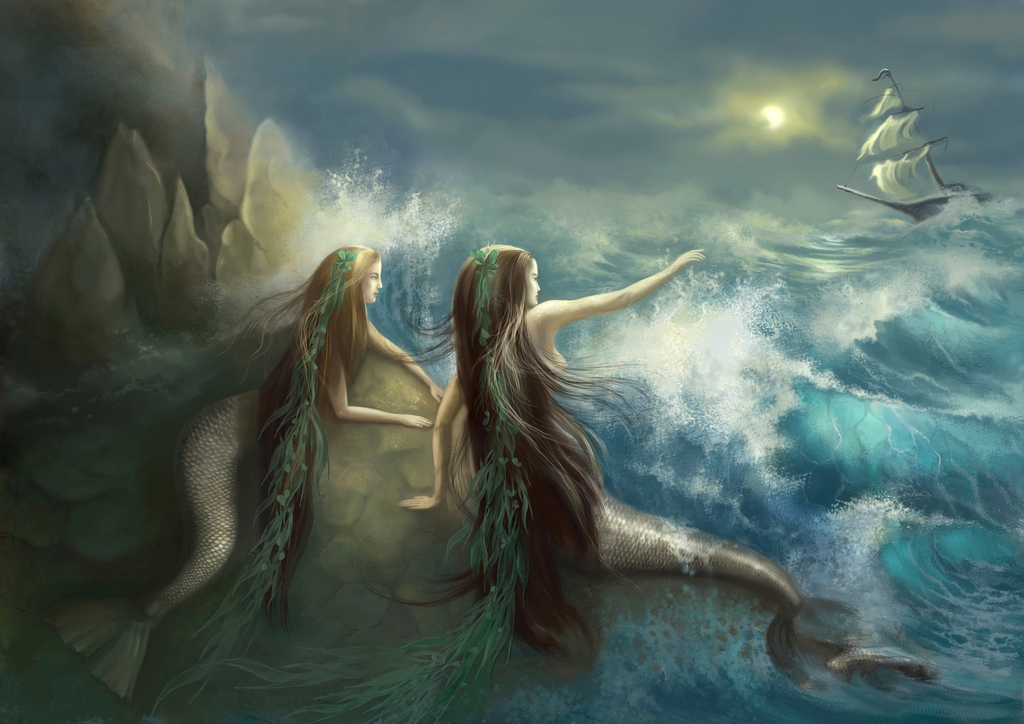 In the past, the sea was just as mysterious as outer space. Anything below the surface was unknown and unchartered and the creatures that lived below were unfamiliar. As many men spent more time at sea than they did on land, they would look for answers to the mysteries below which led to stories of unbelievable creatures spreading from ship to ship. Today, we’ll take a look at a few of these myths and legends of what lives down in the depths of the ocean.

The merfolk legends date back thousands of years and claims of sightings have been prevalent throughout history, well into the 20th century. Mermaids are half-woman, half-fish and are usually thought to be particularly beautiful. However, the presence of a mermaid is never a good sign and was thought to be a bad omen that would signify the impending arrival of a terrible storm. They were thought to use their looks to lure sailors down into the sea and to their deaths. It is not until relatively recently that mermaids were thought to be helpful and friendly as in Disney’s The Little Mermaid.

But why are these stories so widespread? It begs the question – what were these sailors seeing? It’s possible that at the time when the legends of mermaids and mermen became popular, sea-faring men lived in terrible conditions with limited access to good food and a decent water supply so it wouldn’t have been uncommon for them to imagine things or to see women in the water.

It is also thought that many sailors mistook manatees for mermaids. There was little knowledge of the creatures that lived in the oceans, so this would have been a completely new sight for these men, and as the legends spread, more and more people would be on the lookout for these strange creatures with a woman’s body and a fish tail.

FUN FACT: Christopher Columbus claimed to have seen three mermaids in the ocean off Haiti in 1493, although he was a little disappointed that they weren’t as attractive as had been depicted!

Unlike the mermaid, the Kraken seems to be rooted a little more in reality. Sailors would tell of a giant creature with many arms that would be able to reach up high enough to reach the top of the main mast and would drag the ship down into the depths of the ocean, killing everyone on board.

While it may seem like a crazy story, rooted in nothing but myths and legends, it is thought that the Kraken is not so far away from the giant squid which really does roam around below the surface. Scientists have recently found evidence to suggest that some of these species could grow up to 15m and maybe even more. However, the giant squid is thought to be a gentle giant who waits for his prey to come to him rather than viciously hunting, so it would seem unlikely that one would attack a ship full of sailors!

There is one species of squid that has been known to be particularly vicious and has attacked humans on occasions. One diver was attacked by a Humboldt squid which gouged chunks out of his wetsuit using its sharp beak. However, this species would grow no longer than the average person, so it’s somewhat of a stretch to imagine one taking down a ship!

Thankfully, we now know that it’s fairly unlikely that there are any Krakens or mermaids lurking in the depths of the ocean, waiting to feast on any unsuspecting sailors! We also know that if you’re setting sail, you’re going to need some marine supplies, and that’s where we come in. If you need to kit your boat out with everything necessary for a successful trip on the high seas, get in touch with us today by calling 01524 862010 to speak to a member of our friendly team.