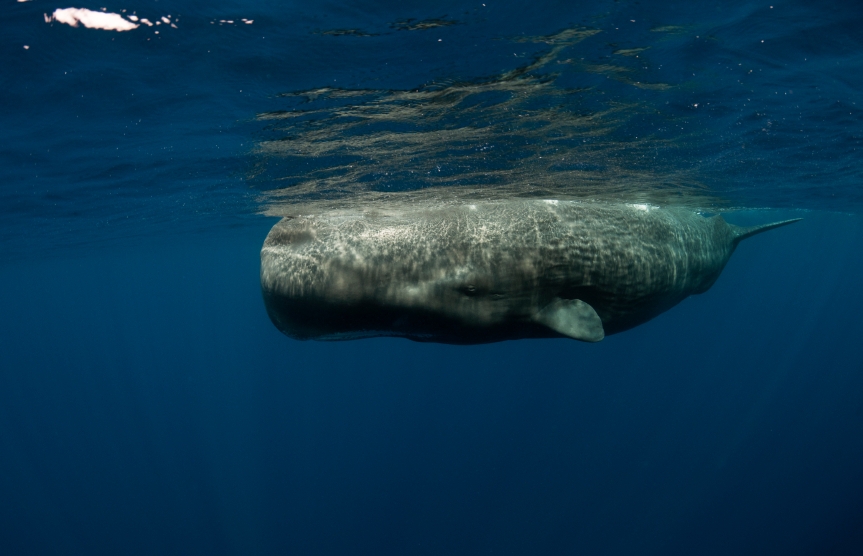 This time in our “Creatures of the Deep” blog series, we are going to take a closer look at one of the most interesting marine mammals on our planet- the sperm whale.

These huge cetaceans roam the waters and can easily be identified by their large, square-shaped head which measures a third of its 49-59 foot body.

So, what makes these marine mammals so interesting? Let’s take a look!

They Have the Biggest Brain on the Planet

The large head of the sperm whale encases the largest brain and cerebrum ever known to exist on the planet.

In fact, for reference, the brain of a fully grown sperm whale has been recorded to be around 5 times heavier than that of a human’s.

Brain size usually indicates the level of intelligence of the person or animal, but in the instance of the sperm whale, the simple fact that it is part of the cetacean family automatically links it with being an intelligent creature. This is because most cetaceans display an incredibly high intelligence level, even showing that they have self awareness and strong family bonds which last for a lifetime.

Why They Are Called Sperm Whales

We know that the name “sperm whale” probably causes some questions to form in people’s minds, so we’re going to explain why the whales are so named.

In the past, whalers believed that the oily fluid that can be found in the whale’s head was a semen and that the whales stored it in a huge cavity at the forefront of their bodies.

However, it was later discovered that the substance was called spermaceti and although scientists can’t pinpoint the function of this oily liquid, it is thought that it aids the whale with buoyancy so that it can dive to distances of 3,280 feet. Spermaceti hardens into a wax-like substance when it cools.

They are One of the Deepest Diving Mammals on the Planet

As we mentioned above, sperm whales can reach depths of around 3,280 feet down into the depths of the ocean. This means that they need to be able to hold their breath for a very long time to make these dives successful.

Most whales are able to hold their breath for around 45 minutes, although some whales have been known to hold it for up to two hours.

They Live In Tight Family Pods

Sperm whales, like most cetaceans, live their lives in tight knit, social family groups known as pods.  These pods are usually split into two groups; nursery pods which contain adult females and their offspring and bachelor pods which contain only male whales who have matured.

These pods only ever really interact during breeding season and you may often see older males swimming the oceans on their own.

The sea is full of interesting and exciting creatures, just waiting to be discovered! Although we wouldn’t want to necessarily meet them all face to face, it’s still interesting to learn about the creatures that we share our planet with.

We know a thing or two about being at sea, being one of the leading providers of marine supplies online in the UK. If you would like to know more information on any of our products or would like to pick our expert brains about all things ship related, don’t hesitate to contact us today by calling  01524 862010 and we will be happy to help you find what you are looking for.